Stonehell - A Megadungeon for the DM on a Budget

Stonehell is one of the neo-classic OSR megadungeons that I am currently running on Roll20. This has given me ample time to study the book(s) and see how I am planning on implementing it into my current shared universe. I am trying to weave both Stonehell and Barrowmaze together into one grand cohesive area and it think it will go over well. I have already reviewed Barrowmaze and I gave it quite the kudos for its quality and abundance of play material. Stonehell and Barrowmaze are similar and vastly different in many ways. I believe with both games you are getting some amazing products, but the devil is in the details on both. 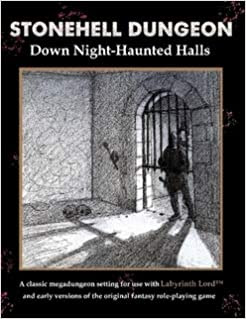 Stonehell is a megadungeon that has been constructed in a clever manner. It was designed for Labyrinth Lord Revised, so that means it is easily compatible with all TSR/OSR products, like Old School Essentials. All dungeon levels are made up of four separate smaller dungeons that when combined make a super level. Each of the areas has its own flavor and its own unique traps and denizens, but the game has some lovely theme going on here. The full dungeon is separated into two books, basically the first 5 levels, and the last 5 levels. As the dungeons go deeper, they get not only more dangerous, but more and more unusual. There are some gonzo things that can be thrust upon the players, and the survivability of the dungeon is grueling.

Stonehell in the fiction was a social experiment gone wrong. It was designed to be a prison that the prisoners dug for themselves. Eventually the prison became filled with so many people, it took on a life of its own. The prisoners dug deeper to escape the prying eye of guards and rules and set up mini-domains in the dungeon’s depths. Eventually the prison was liberated, but many decided to stay, and many were driven so mad by their time they had no choice but to stay. Time has passed and it is now the gathering place for many a strange group of people and humanoids. If I had to give it a feel from a video game, I might suggest Bioshock.

There is an overall thread/plot happening in the dungeon, in fact, besides the main plot there are a bunch of mini-plots that can be latched onto as well. The players can slowly over time see the danger Stonehell presents and choose to stop it, or just steal its riches and run far away. I find the plot to be interesting and quite fun, but I am not going to spoil it here, buy the books and find out.

Good and the Bad

I think the biggest feature you receive with Stonehell is a lot of bang for your buck. For people that were turned off at the price tag of Barrowmaze, this is a much easier pill to swallow. The first book, Down Night-Haunted Halls, is $13 for a printed copy. The second book, Into the Heart of Hell, will run you $18 for a printed copy. You get roughly 40 dungeons for $31 which is an amazing deal. The print quality is good for the price and comes in a black and white paperback format. I love the fact that I can just take a small chunk out of these books and make my own dungeon out of it. In fact, you do not need to run Stonehell itself for this to be useful. Want to throw your players into a snake cults ancient temple? There is a dungeon for that. Want to have a dungeon out-of-time? There is a dungeon for that. Want to have a lair of trolls? There is a dungeon for that. It is a grab bag full of goodness.

The thing people might not like about this dungeon is that there are not a lot of bells and whistles as far as production value. The book is straight forward and does not have a lot of amazing art or a town with which to venture from into Stonehell. You get a basic background and a plot thread, then it is straight into the meat of the project. Not a lot of frills to go with it, but in general it is not needed for many DMs. I connected this adventure to Barrowmaze and now Bogtown is the base of operations for going into Stonehell, simple and effective. We all have a “base camp town” in our back pocket we can use for an adventure like this. Whether is a Keep on the Borderlands or a Village named Hommlet, it is easy to get around this perceived negative. 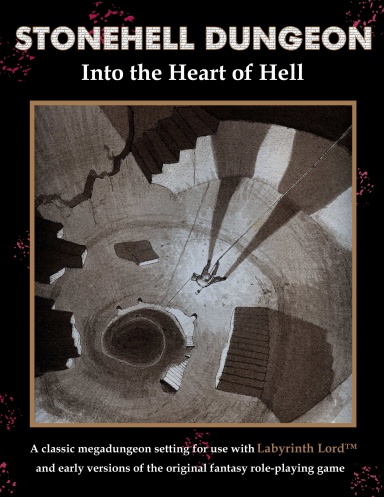 Overall, you are not going to get a much better dungeon for the price. This product is for the thrifty DM, that does not want a lot of extras, but a lot of meat. I think comparing it to Barrowmaze is fair and to say they are similar products. Some people will want the car with a lot of extras and a shiny coat of paint. Some people will want an affordable car that certainly gets the job done. Let’s face it, many of us will want them both!

Are you lacking a town to run Stonehell out of? Try Niklas Wistedt's free town HERE.

You can check out my full review of Barrowmaze by clicking HERE.

You can purchase Stonehell HERE. 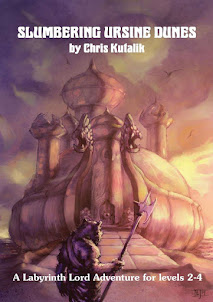