The Chronicles of Amherth Setting

I was encouraged to check out Small Niche Press’ “The Chronicles of Amherth” setting. This was originally created for Labyrinth Lord which makes it perfectly compatible with all BX/OSE products specifically, and OSR products as a whole. DrivethruRPG had a small press sale and I thought it would be the perfect time to try these products out. The PDF itself is 77 pages and comes with a free adventure all for the cost of $1.49. Once I read it, I liked is so much I invested in the POD which came in at a staggering $5.99. 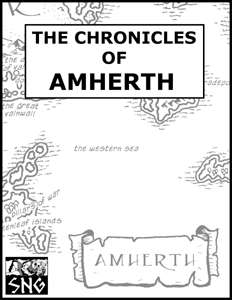 Amherth is what I would call a classic D&D setting. The world is humancentric, magic is considered rare (1 in 10,000 people), and it has an ancient past with civilizations that have long since left the world. The book has several different cultures throughout the world each with notes about their creative inspirations. An example might be the Empire of Xanne, which is a Roman inspired area with an Emperor that apparently cannot die. Another example is Guildeland which use to be a part of the Empire but broke free to be a merchant paradise. This was inspired by the merchant princes in the Italian Renaissance. Each entry has a few pages dedicated to fleshing out the environment of the area which give you a good idea of what is going on, but enough room to make you own ideas. I think there is where the strength of the product lays, enough details for clarity, but a lot of room to grow. 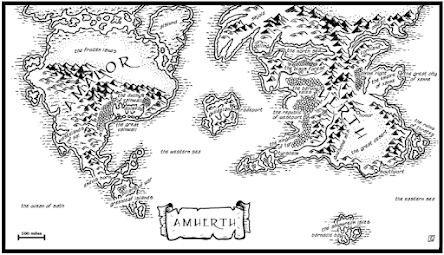 Beyond the world description of the various areas, you get the following (from Drivethru):

-The Gods of Amherth: Twelve detailed gods and how they fit into the setting.

-History of the Ancients: Details of the powerful beings who almost destroyed the world and the legacy they left behind.

-The Known World of Amherth: A detailed overview of the setting's major realms and regions, including the Duchy of Valnwall. (Gazetteer-style guidebooks to follow!)

-New Monsters: 40 fully detailed races and monsters for use in your Labyrinth Lord campaign. 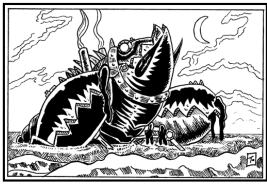 If you are the type of person that wants more information, there are three books that expand on the details of the material. There are two guidebooks to specific city-state regions of the world and one book dedicated the Ghoul Lands which is an area dominated by the undead that frequently likes to invade neighboring territory. I believe the PDFs are currently under a $1, with one being pay what you want. Overall, I am quite impressed with this little setting, and I am planning to use this as my setting in my upcoming games.

If you are looking for the book click HERE.

PS: Small Niche Press also makes WWII: Operation Whitebox a World War II ruleset based on Swords & Wizardry. I really like it too and the main PDF is pay what you want. You should take a look. 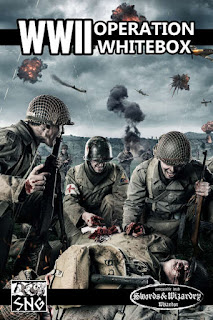 Posted by Ryan Marsh at Wednesday, October 13, 2021 No comments: