I’ve honestly started this article three times now. Originally I wanted to do a piece that talked about the historical "fact" of Crossbows vs Short/Longbows, that way we could use it to make reasonable approximations for the game we love to play. One of the only facts I was able to uncover was that there were scant facts to be had. Most of people’s assumptions about all bows come from conjecture, myth, and most likely hyperbolic, historical reference. So instead of providing “facts” to base my article on, I am going to base it on my own perception of the subject, flawed as it may be. Please note, I am not claiming to be an expert, and I am not overly concerned with “facts”. What I am concerned with is how items play out in our fantasy world, and that each of them has some place of its own. I know the old adage, “Crossbows were easier to train, unlike bows which took years to master.” I don’t buy that. I had never shot a bow in my life and after about 15 minutes I could hit a reasonable size target at a good distance. Unless by training you mean pure physical strength, but most bows in D&D do not have a STR minimum. 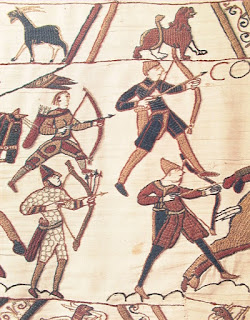 These guys get all the glory, crossbows get no respect.

Over the years there has been much discussion in the D&D communities over how to best represent crossbows and their chief competitor the bow. There have been many different ways of looking at the issue through range, damage, rate of fire, ease of use, accuracy, versatility, and famously armor penetration. Oftentimes the bow wins out in these comparisons and you do not see many PCs based around the crossbow, but will see many archer concepts. As a note, my strongest influence will be B/X D&D, but as always this can be applied to many different systems. Also, unless noted I am speaking about a hand drawn crossbow and not the heavier variety that required mechanical help to load.

Why crossbows are generally not good in B/X

They do the same damage as bows, and they can outdistance all of the bows as well. At first they seem like the perfect choice. The devil is in the details though. Many people play with the rule that crossbows are slow, and thus go last in the round, and on top of that they can only fire every other round. This makes them truly dreadful and the main reason that no one in their right mind would take them. The little bit of extra range at the sacrifice of both speed and rate of fire is too much. This almost seems like a double penalty for the same thing. Yes, crossbows are slower to reload, I would either make them go last OR make them shoot half as much. The latter appears to have more “facts” behind it as many YouTube videos show bows shooting almost exactly twice as fast as a crossbow.

I'm sure people have seen this video already, but here it is again.

Rate of fire is important on two fronts, character efficiency and player fun. As far as an efficient character, it seems obvious that a character firing twice as often over time will do more damage to the opponents. Even more vitally important is player fun. There is nothing more boring that sitting out half the turns in a combat waiting to reload. In my games I actively encourage new players to steer away from the crossbow, and pick up the short or longbow, because I want them to be rolling dice each round.

Ways to help the crossbow

Oftentimes in games the crossbow has the ability to penetrate armor, better than a short/longbow. This has confused me over the years, because you hear about the English Longbow are how it cut through armor, not the crossbow. Then it is crossbows that cut through armor, and the Longbows do not. In my limited experience, a hand drawn crossbow is no better at going through armor than any other type of bow, and might be worse. More so, I personally do not like the ability to ignore levels of armor for these weapons, because it is often forgotten, and somewhat subjective. The GM has to determine is this creatures AC based more on speed, or armor? What about a combination of the two? How much then? It can slow a game down, and I am not about that.

Lesson to be learned, armor is very tough.

One of the main ways I make the crossbow a bit more appetizing is to make it a bit faster on the draw. Crossbows have the advantage that they can stay ready to fire for an extended period of time. You can load a crossbow, and walk around with it ready to fire. Unlike a bow, which if you walk around with it pulled back, you will eventually get tired and have to relax your arms. What does this mean in game terms? I would allow a readied crossbow the ability to fire before the 1st round of combat’s initiative is rolled. One quick snap shot, then the owner can decide to drop it and draw weapons, or begin the reloading process. This makes it a good choice for frontline fighters, as they can get one shot off before the melee begins.

Another way you can make the crossbow better is to allow a person to line up the perfect shot. We have very few “facts” about crossbows, but one thing that is known is that they were used in siege warfare. People could rest a crossbow on a support, and line up a shot for an extended period of time, and then just pull the trigger. How do you translate this into game mechanics? I would allow the crossbow to aim for an extended period of time, compared to a standard bow. I think that either weapon can line a shot up for one round, granting a +1 bonus to hit. After 10 seconds of drawing a powerful longbow, you get some diminishing returns due to fatigue. On the other hand a crossbow can aim up to an additional two rounds for a huge +3 bonus to hit. This seems to be in keeping with both weapons, and seems to be how they were intended to be used.

Crossbows are a more versatile weapon in its uses compared to the standard bows. You can use a crossbow while laying down, in a tree, hiding in a bush, or a variety of other uncomfortable situations. A long bow is about six feet tall, with a short bow coming in between three and four feet tall. These traditional bows require more space, and cannot be used as tactically. Is your party having to crawl through a tunnel, you are not going to be able to use that longbow in that circumstance, but the crossbow would still be an option. They have specific situational advantages and GMs can create scenarios that allow the crossbow to shine.

Players will often buy helper and retainers for all sorts of situations. Guards, torchbearers, animal handlers, grooms, even valets. In all my time playing D&D I have not seen a player hire someone to reload their crossbow. This was not without historic precedent, and would take away one of the main disadvantages of using the crossbow. This allows the player to keep up with the other types of archers, and still have the situational advantages of the crossbow. 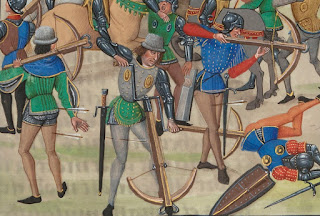 This is the type of situation that a loader would be nice.

I hate when there is an obvious choice in a game, and in B/X it is obvious if you can, do not use a crossbow. I am hoping that this article might spark some ideas in your head on how you might make it advantageous for a player or enemy to use this weapon and not relegate it to the Tomb of Forgotten Weapons.