Coming from the lands of mystical deserts and high adventure, the Sahira are spellcasters and keepers of great lore. Often associated with the genies, they command great power and are greatly respected in many circles high and low. There are as many tales telling of the generosity of the Sahira as there are tales of their cruelty, only the winds of fate know their true intentions.

Males are known as Sahir. 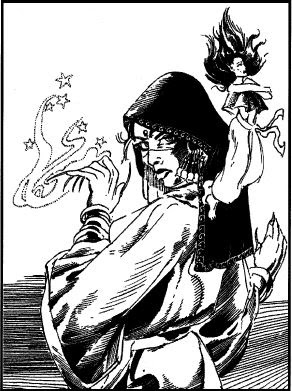 Sahira and her Gen

Gens are part of the extended genie family. In the Sahira’s native plane, the gen appears to be about one foot tall genie, and has appearance characteristics associated with one of the four elemental courts of the genies. The Sahira can perform a ritual that requires 24 hours to complete, and costs 1,000 GP multiplied by the number of gens they have had over the course of their entire lifetime. Once the ritual is complete the bond between the Sahira and Gen is complete. They can communicate telepathically as long as they are within 100 feet of each other. They both know if the other is still alive, even if on different planes. It is assumed that a starting Sahira has already completed this ritual.

Gens are considered to be of Low Intelligence and have AC 6. They have hit points equal to half of the Sahira (round up), and attack with a Thac0 of a monster with half the Hit Dice as the Sahira. The strike with an elemental attack that does 1d6 damage. Gens are immune to damage from their native element.

Gens are not completely altruistic and the arrangement made with the Sahira is supposed to be mutually beneficial. Gens will expect at least 8 hours a day time to recuperate in their native plane, and will expect 20% of the Sahira’s profits in their adventures.

Sahira do not cast spells in what is often considered traditional magic. The Sahira have made bargains with the various genies of the elemental courts to gain the use of a special type of familiar. This familiar, a Gen, is able to go into the other planes of existence and “obtain” a spell for their Sahira to use. This spell is often stolen from the mind of a traditional wizard that might be in a different city, land, or even plane. The theft can also come from divine beings of the planes, but at times this can come at a great cost. Stealing from a god-like entity is never a good idea, even in the best of circumstances. Sahira can use all magic items and scrolls like a traditional wizard, but do to the nature of their magic, cannot scribe scrolls. 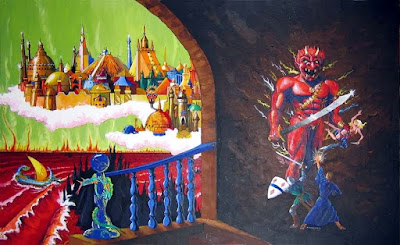 Many people think this is a demon.

If a wizard of equal level to the Sahira could cast the spell it takes 1d6 rounds +1 per level to retrieve the spell. If the wizard could not normally cast the spell at their level, the time then converts into turns. If the spell is extremely esoteric, or divine in nature, it then becomes hours. Once the Gen is sent, it cannot be recalled until the search is over.

The base chance of a Gen being successful is 6 in 10 with the modifiers below. A roll of a 10 always fails. If the base chance is zero or below, the search for the spell will automatically fail. Successfully retrieved spells must be cast in the next 3 turns or the spell is lost. A Sahira can only know one spell at a time.
Stealing from divine powers often will not go unnoticed. Every time a divine spell is attempted, the GM should roll 1d10, if the score is equal to or less than the level of the spell, the entity has noticed. It is up to the GM to determine which entity, and the reprisal if any. Severity should be determined by the level of the spell sought.

Levels 1-2
The Sahira suffers a -1 penalty to all rolls for the next 24 hours. (This includes spell theft rolls)

Level 3
The Sahira suffers the effects of a Curse spell.

Level 4
The divine power sends one of its servants to teach the Sahira a lesson. The entity should be a minimum of 1 Hit Die higher than the Sahira’s level.

Level 5
The Sahira is brought into the presence of the divine power and asked to explain their actions. The GM is encouraged to make the punishment fit the crime.

The Sahira gains a +2 bonus to all saving throws versus all attacks of the native elemental of their Gen. This increases to +4 at level 5. 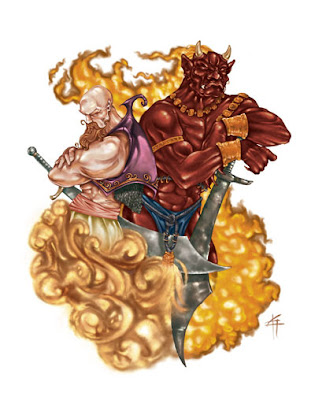 At 8th level the Sahira has a 3 in 10 chance to summon a genie.This gain a +1 bonus at level 11 and level 14. This may only be attempted once a week and the ritual lasts one hour. The spell only summons a local genie, it does not assure their help. The Sahira and their companions are expects to show deference to the genie, and the genie will be expecting some form of compensation for their effort. A reaction test would not be out-of-order modified by the terms that are arranged. A summoned genie in this manner will never grant wishes. If the genie agrees to assist it will be for one single task, which lasts no longer then a day and one hour. (25 hours) 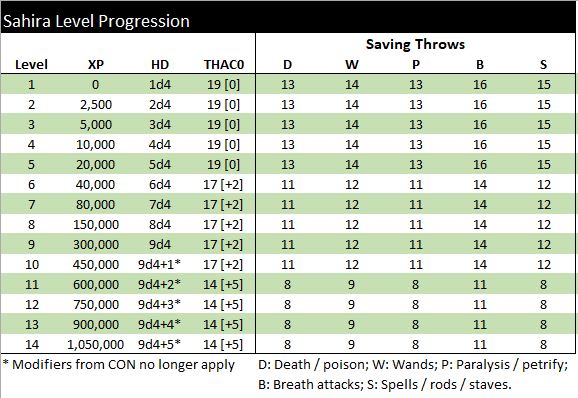 Note: This is an adaptation of the Sha'ir class from Al-Qadim in AD&D 2nd Edition.