I am writing a five part series that will cover some of the new aspects in the Old School Essentials Kickstarter by Necrotic Gnome. In full disclosure, I was asked to preview the Old SchoolEssentials Advanced Fantasy: Genre Rules and Druid and Illusionist Spellbook. I was asked to give my feedback on the two items and with a particular eye for making the new material feel like a B/X product, while still embracing what is interesting about the new material. For me this was easy work, because the preview material I received was amazingly good, and I was able to offer a few tweaks here and there. In talking with Gavin at Necrotic Gnome, I asked if I could do a series that would share with my audience some of the cool features that are in store for those who get these great products and he graciously agreed.
The hardest part of this is what to share? There is so much goodness crammed into these pages, the choices are plentiful. I think something that I was curious about in the beginning is the new classes, so I will begin with one of those. In the backer updates the Drow, Bard, and Half-Elf have already been shown, so I will not choose one of them. I saw someone talking in the MeWe chat the other day about how a Paladin would be different than a Cleric, so why don't we start with them? 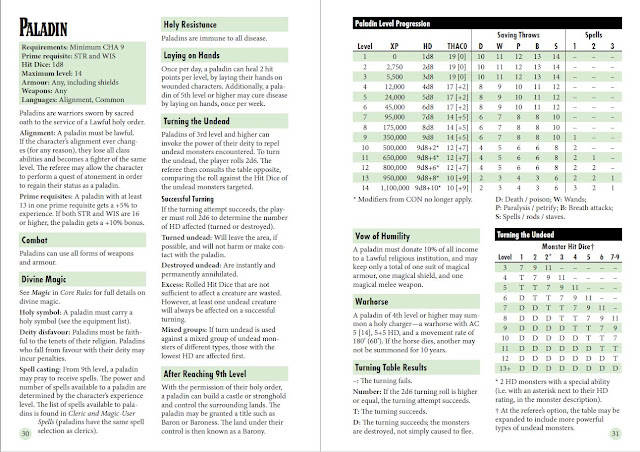 Starting with the requirements box in the upper left corner, the Paladin is somewhat unique in that it is a human character that has multiple prime requisites. It has both STR and WIS, but also has a minimum of 9 in CHA. This means that a character will have to roll an array of decent stats in order to pull off this class. One of the advantages is that if either STR OR WIS is above 13 you get the 5% experience bonus, but in turn, both STR AND Wis have to be above 16 to get the 10% bonus. With the minimum 9 in CHA also, you can probably assume there will be a lot of Paladins getting that 5% bonus, but quite a bit fewer are going to reach that lovely 10% bonus. Other than those changes the rest of the material in that box reads like a Fighter. Paladins can use any weapon, any armor, and can use a shield. They also retain the Fighter’s beefy D8 hit die.
Next, comes some of the classic features of the Paladin from other versions of D&D. Paladins are restricted to a lawful alignment, as one would expect. Paladins have an array of special abilities, which include Divine Magic, Holy Resistance, the ever popular Laying on Hands, and Turn Undead. Paladins begin to have Cleric spells later in their career. They get their first spell at 9th level which means it is a nice addition, but it is not swinging their power by a great degree at that point. Holy Resistance is a great ability, but one that is often forgotten by players and GMs alike. I have played in many a game were the player remembers several minutes after the fact that they are immune to disease, and nothing will turn a GMs smile upside down than thinking they infected a player, only to have the player remind them they are a Paladin. While Laying on Hands is not huge in the amount of hit points it provides, it is flexible in that the Paladin can dole out the hit points as needed. They can cure those nasty diseases once per week staring at 5th level. The Turn Undead feature works exactly like the Cleric’s ability, except that the Paladin Turns creatures as if lower level. Having a 2nd person in the party that can Turn Undead will be very useful for any group. 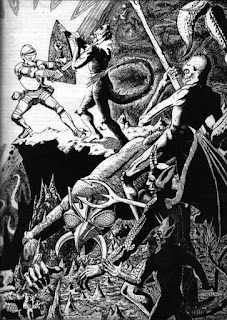 One of my favorite classic D&D pieces of art

Like most classes the Paladin upon reaching 9th level can establish a fortification with the slight caveat that they must obtain the permission of whatever holy order they serve. This can lead to some interesting in-game ramifications, especially if the holy order has its own agenda. The Paladin retains the classic tithe feature in that they must donate 10% of their income to a Lawful religious institution, and they may only have a restricted number of magical armaments. This restriction should not be ignored, as it will affect the player very little in the beginning of a campaign, but quite a bit more as time transpires.
The Paladin upon reaching 4th level can receive a high quality warhorse. I would suggest that this be a campaign feature, and not have it just appear out of thin air. Maybe the Paladin and companions have to complete a quest to find this amazing steed. They could hear about a holy charger that has been captured by Bugbears and must hatch a plan to rescue it. The warhorse then becomes a character unto itself. It is also not a disposable ally, because once it dies, another cannot be obtained for 10 years.
Now we will compare the Paladin’s Level Progression to a Fighter is see the differences. The Fighter and the Paladin’s hit dice and Thac0 progress at the exact same rate, the big difference is that for all the special abilities that a Paladin receives, they must gain an additional 750 XP to get to 2nd Level. This becomes an exponential increase as time progresses, and a Fighter will hit 14th level before a Paladin finishes 12th level. One thing that people might not notice at first glance is that Paladins have a 2 lower on all their saving throws compared to the Fighter. This is not putting them in the overall range of Halflings and Dwarves, but they are not that far off in several categories either.
To me the class feels just right, it pulls several of the classic tropes from the AD&D world that many of us know, but condenses the material to make it feel like a B/X class. This will seamlessly blend into the parties of the classic classes from B/X, without feeling overpowered.  While the Paladin has several advantages, it has a balancing complement of disadvantages as well. You will have several impressive abilities, but that level climb is quite high, with restrictions on magical gear, wealth, and alignment. Players and GMs are going to have a lot of fun with this one. If you are a backer, and have not added this book to your BackerKit, you should before the kit closes. If you missed out on the Kickstarter, you will have the option to pre-order this and all the books from the Kickstarter right HERE.

This is going to be an excellent product.

What do you think of the class? Are you excited to see more from the two expansion books? Make sure to comment below on things you would like to see, follow the blog for the next four parts, and share with other interested parties.

If you are looking for the creators of this great product please check out their website. https://necroticgnome.com/

EDIT: This article proved to be very popular. I went ahead and created a Facebook group for the blog, if you are interested the link is here.
Posted by Ryan Marsh at Wednesday, June 19, 2019