My Changes to the BX/OSE Thief Class

The three most common classes I see mentioned for change is the Magic-User, Fighter, and Thief. I have discussed ways to balance out the first two, but I left the thief off the list because I honestly did not know what to do with them. They desperately seem like they need SOMETHING, but it is hard to place a finger on exactly what it is. In most games that I have run the parties do not even have a thief and seem to get by well enough. It was not until I really started to examine the thief and look at what the class had and did not have that I discovered how I was going to change them in the future. I was not going to change a single thing about the class. 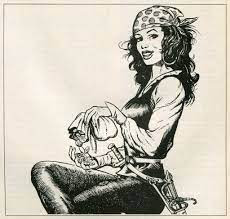 The class is perfect just the way it is and is quite useful to a party, but not to the point that it is an absolute necessity (like the cleric imho). Is this purely a bait and switch article that tells me that everything is just dandy with the thief and to go about your day? No. To be completely honest the thing that ruins the thief more than anything is you. Yes. You. The Game Master, for convenience’s sake or lack of rules knowledge, often makes the thief useless. The thief is generally an amazing class when the rules are used correctly and as written. Let me give some examples.

Your characters find a treasure chest that is locked in the game full of God knows what? Many GM’s I know (I am guilty here too) allow their players to search the chest for traps using their 1 in 6 chances on the D6. This seems to be incorrect. The party’s chance of finding traps is specifically for room traps, not treasure traps. Treasure traps seem to be the sole purview of the thief class. If you are allowing the party to use their room trap feature on treasure, you are hampering the usefulness of the thief, not the class. The chest is also locked, if you allow the players to just bust it open easily (and without risk), you are reducing the viability of the thief. If the party cannot open the chest and decides to take it with them and you do not use encumbrance, you’ve reduced the effectiveness of the thief.

Here is another example that I constantly get incorrect. Many GMs interpret the player’s ability of “Listen at Door” to be the same thing as “Hear Noise”. Words matter greatly when interpreting these rules and “Listen at Door” is specific. You can only use this to literally listen at a door, not hear monsters approaching, or in my opinion get specifics of what is behind the door. With “Hear Noise” the wording is much broader and can be used in a variety of situations. If you are giving all your non-human PCs a 2 in 6 chance to “Hear Noise” and not “Listen at Door” then you are harming the thief, it is not that the class is bad or needs correction.

Another example is the Open Doors skill that all PCs have 1 in 6 chances, plus there STR modifier. This is specifically for stuck doors, not locked doors. In theory ALL doors in a dungeon are considered stuck, unless noted. I often do not go with that because to me it is a bit weird. But for the longest time I allowed this to open locked doors which completely undermines the point of the Pick Lock skill. The thief can allow a party to get through a locked door much earlier then intended. Many times, in a game there is a key that needs to be found to access certain parts of the dungeon. The thief can “hack” the dungeon and skip certain parts.

One of the primary abilities that can come in useful for a thief is moving silently. Generally, I handle sneaking with the surprise rules. Any class can try, and sneak and the enemy have a base chance of 1 or 2 on a D6 to discover they are being approached. I then consider modifiers like armor. Plate for me adds 3 to the roll so on a 1-5 on a D6 they will be discovered. Is the guard distracted? Maybe reduce the number by 1 etc. If the thief makes their Move Silently roll, they are completely silent and there is no chance of detection. If they fail, they are still moving quietly and thus the monster has a base 1 or 2 on a D6. I have seen many GMs rule that a failed Move Silent roll is an automatic discovery, and, to me, this is wrong. This is not a wholly original idea, and while I disagree with some interpretations, I got this idea from http://web.fisher.cx/robert/rpg/dnd/thief.html. 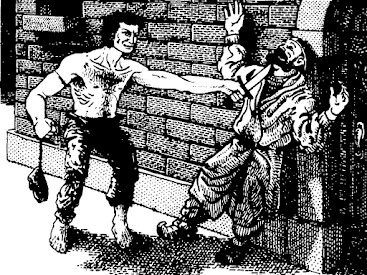 The thief class does not need to be changed, you need to change how you GM the game to make them useful. To me the biggest enemy of the thief is not an ogre with a magic sword, it is a GM that does not allow them to fill their niche in the party. They are certainly an accessory class (they where not in the original rules), but they still are a great class, and many creative players can do a lot with them.