Froglings, Harpies, Zombies and More! Random Encounters for Barrowmaze or any Swamp

I received a gift and I decided to share it with the masses. One of my best friends in the world, who just so happens to have a PhD in English asked me for a favor. He said he was feeling a little burnt out on RPGs and wanted a “writing assignment”. I mentioned that I was running Barrowmaze and could use some interesting swamp/barrow encounters. He never fails to impress me. Not only did he produce several interesting encounters that have amazing potential for hooks and NPCs, but he also did layout for it and spruced it up. His talent is only overshadowed by his lack of confidence in his own work, so I asked if I could share it with the world? He agreed but made sure that I mentioned that the art was not original, and he wanted to credit the artists, but could not find many of them. 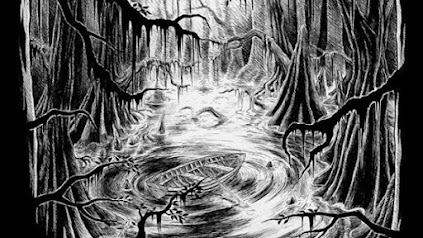 Below is a single example of an encounter, the PDF I am linking below for free, has many more. I hope you all enjoy it. He is a member of the THAC0 Blog Facebook group, so if you feel inclined, you can thank him there. Enjoy!

Trader Grobe and His Flapmen

The group encounter a group of fifteen Froglings led by 3 2HD leaders. Once of them has been cursed by a golden circlet that gives him access to spells but forces him to speak in haikus, another is a warrior looking to defeat and devour his siblings, and the third is a skilled rogue that has fallen in love with a swamp nymph.

-Trader Grobe: Is the leader of the group. He was able to break into a few barrows and loot metal weapons from the corpses, and since then, Grobe learned to trade with the odd explorer or cultist in the Barrowmoors for additional gear. He wears leather armor, bears a shield, and uses a short sword. He also has a few daggers. Grobe possesses the ability to speak a rudimentary form of the common tongue to trade with other peoples. He wants to acquire more weapons and armor for his band, and he can supply a group willing to sell him weapons with what seems to be a limitless buffet of fresh fruit and pure water. A swamp nymph, Antheia of the Mangroves, blesses this group with fruit, swamp prawns and other freshwater crustaceans, and water, in exchange for their armed protection against logging groups and marauding visitors to the Barrowmaze. Grobe is deeply in love with the nymph and will protect the location of her tree with his life.

-Skudsku the Swallower: Skudsku works as Grobe’s muscle. Unlike most Froglings, he stands five feet tall, weighs twice as much as the average Frogling, wears a chain shirt, and carries a battle axe that is larger than he is. Skudsku discovered he had a taste for other Froglings when he first hatched and devoured a dozen of his brother tadpoles. The rest fled. Since then, Skudsku has continued practicing cannibalism, but he is secretly terrified his siblings will return in a group to punish him for eating half his parent’s spawn. He believes that the equipment Grobe provides him will give him an edge in the final battle.

-Lorehunter Fuguuzzi: Fuguuzzi was a normal Frogling that had the unenviable job of testing out possible magical items Grobe found in the barrows. She was normal until the day she put a magic item called the Torc of Gwyn Boddell around her neck. The torc is a ring made of metal with a single green jewel in the center that glows when activated that is permanently locked on Fuguuzzi’s neck. It can only be removed by killing Fuguuzzi, and then once it is clasped around another creature’s neck, it can only be removed if the creature is killed. The Torc allows its wearer to cast several spells at will, but it carries a major curse. The wearer of the Torc can cast Detect Magic, Read Languages, Read Magic, Find Traps, and Locate Object, all at will, although each spell drains 1d4 hit points from the wearer. In addition, it increases the wearer’s Intelligence to 14 if it is lower than 14. Also, the wearer can only speak in haikus. Each line must be five syllables, seven syllables, and then five additional syllables. Besides being forced to speak in these patterns, the wearer also must use his or her words to describe concrete, natural things (a tree, clouds, a rock) in a way that is suggestive or symbolic of his or her meaning. Grobe knows that Fuguuzzi is useful, but all the Froglings also find it extremely frustrating to communicate with her. If characters come to Fuguuzzi seeking advice, Grobe will negotiate for useful goods in exchange for the Lorehunter’s services.