The Isle of the Plangent Mage Review

The Isle of the Plangent Mage

I am going to get this out of the way in the beginning, I love this adventure. Not that I did not love the other two that I have review so far, but this one fits my exact GM style. This, to me, is not an adventure, but a mini-campaign in the style of Keep on the Borderlands. It is designed for characters in the 3rd – 5th level range with the appropriate old school caveat that encounters are not balanced. It is hard to know where to start on this one, because I like so much, but I also do not want to give away crucial details of the adventure. In general, there is a seaside town, and it has the support of a local Magic-User and his wife. Both have gone missing, and some strange occurrences have started to happen, like sea life beaching itself regularly. The DM has several hooks provided to get the players to the town and searching, the rest is up to them. 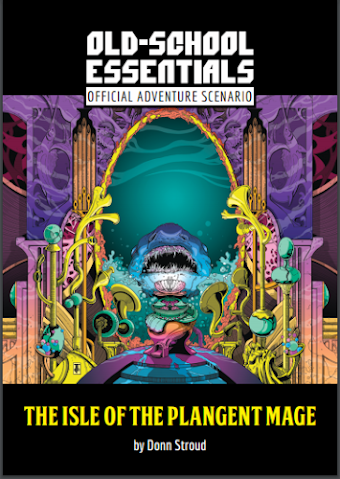 The adventure is set around the town of Imbrich and anyone who has read their Lovecraft will see another obvious connection with a seaside village. The town had formed a relationship the local Magic-User, Cetus, who ran local lighthouses. Cetus used the lighthouses and the grounds underneath them for his experiments with both sea life and sound. You get a complete work up of the local village complete with notable locations and personalities. This can serve as your party’s home base as they delve into the various locales of the setting. Several of the villagers are noted as willing to pay for certain items or information from Cetus’ grounds. An example might be that the local blacksmith wants some of Cetus’ ever-burning logs. This gives the players even more reason to venture into the locations and find these items for the locals.
There are several locations that the parties can explore that each have their own feel, dangers, and rewards. There are a series of caves along the coast, a place called Darksand Isle just offshore, the isle has two separate Lighthouses that can be explored as well. Then you get the Magic-User’s Undertower, which his underground domicile and laboratory. This Undertower is eight levels deep and certainly qualifies as a dungeon. Each level generally has about six to ten locations in them, so it will take the players a bit of time to explore. Strange beings lurk through these halls along with strange devices imagined by Cetus himself. 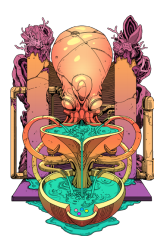 As for the book itself, it has the same quality layout that Old School Essentials is becoming known for throughout the industry. Maps are clearly readable and accessible without excessive page flips. The bullet-point format allows a GM to easily run this off the cuff, but a read through before would not hurt. The art is brilliant and colorful, it brings the setting to life. This is also a bit of a unique setting. There is a lovely nautical feel throughout the entire book. If you are looking for a classic sandbox that is not a typical dungeon, then you have found it.

I think this is a great example of a sandbox adventure. There is not set destination that the players must go, but they get to make their own choices about what to explore. There is not a “quest” per se, but there is a story to what has happened at this town and it unfolds as the players gather information. You can plunk this little town into almost any setting, and it will blend in with the background seamlessly, the only thing you need is a coastline. I give this this my highest recommendation and think everyone should check this out.

Click here to buy The Isle of the Plangent Mage

DriveThruRPG is currently having GM's Day Sale click HERE to see the deals.