Does edition in D&D dictate tone?

I am not the first, or best to comment on this subject, but these are some of my ideas on the topic. I have been thinking about this a lot lately and wanted to write a little bit about it. I currently run a 2e weekly game, with my students at a local community college, and I am a player in a semimonthly 5e game with friends I have known for 30+ years. There seems to be a trend online, or at least on the pages I visit, that any system of D&D can run games in any manner that is chosen. I believe that this is correct, but I also think that the tone is easier to set with certain rulesets.

When I was getting ready to start my campaign last August, my group at school was 5e players, who I had run several games for in the past. I mostly ran 5e for them, but on occasion, I would bust out a B/X clone and run them through a quick one-shot for that week. The dichotomy of the two systems was very stark, and easily noticeable. The level of “heroics” was different in both games, 5e characters were much more capable, and even able to venture off on their own with less risk. The lines between character classes was blurred, because often a “fighter” character would have some abilities from another class, and vice versa. This created a tone that lead to some very interesting, but often silly results. It was very harder to get a serious tone in a game where their lives generally are not at risk, without total overkill.

In 5e you can create a Batman like character, that can do it all.

I wanted to get a different reaction, and I did by having a campaign that is set in an OSR ruleset. The group quickly learned a few lessons while dungeon delving, doing “silly” actions like trying to ride the giant worm ends badly, splitting the party is bad, protect the magic users, etc. A group of goblins or kobolds were dangerous opponents, not fodder. Players generally “stayed in their lane” as far as the classes went, and were forced to work as a team. Fighters do not have magic, thieves must try and counter traps, and clerics need to rescue people. Everyone had a specific role in the machine, and the machine broke down if they all did not play their parts. This lead to some other interesting changes that I noticed with the players, they took the game more seriously overall, because they knew death could happen, and they felt attachment to the characters, because they had earned things. Each XP was hard fought, and when a character earned a level, it had a bit of weight. 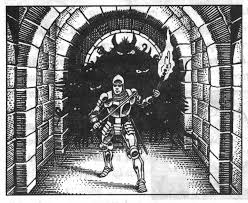 This lone dude is in trouble, never go alone in OSR.

There is one of my players that floats between my game, and the 5e game that is concurrently running in my club. It is funny to watch the change in her style between the two games. Overall, she plays bombastic characters, but she has to give some pause when playing the older style, because leaping before looking can cause major issues for the party as a whole. This is a change that I like, because in general I do not like the frivolity of decisions that 5e can sometimes generate, in my experience.
In talking out the other side of my mouth, something I like about 5e is that it is harder for one goofball to spoil the bunch. I had issues with a rogue player in my games. (Rogue as in, didn’t work with the party, not a thief. He was actually a wizard) He would cast spells, just to cast them, not caring if they hurt the party or other players. This really hamstrung the group, I think a 5e game could handle one misfit player better than an OSR type game, where everyone needs to be on the same page.

This is not meant to start an editions wars type conversation, and say one edition is better than the others. This is just to say that one edition might be better at evoking a certain style/tone then the other. The newest edition is great for heroic fantasy, where people dive into danger without a second thought. OSR games can add a certain gravity to the games, where you must plan your actions and use teamwork to overcome an obstacle. I enjoy both for different reasons, and I play both with different goals. I am glad we have so many options these days.