Touched by the hand of God, and blessed with the abilities to protect their faith and all the people of the book. Al’Numur are people selected to bare the gifts of God, take The Shape, and crush the servants of the Fallen Angel. When in battle, the Al’Numur take The Shape, and gain characteristics of a tiger with the ferocity to match. Striking out with tooth and claw, moving with great alacrity, and as the years pass more and more abilities granted from on high. There are rumors that the Fallen Angel has servants akin to Al’Numur, but whose shape is that of a hyena. Those cannot be confirmed and are most likely the ramblings of goat herders by the camp fire.

Al’Numur take a sacred oath that they shall never use weapons or armor beyond what God has given them. When choosing an alignment, Al’Numur must be of Lawful alignment and revere the tenants of the faithful. If at any point the Al’Numur violates a serious tenant of the faith, they will lose the ability to use The Shape until they have atoned for their sins via an Imam. The Al’Numur is expected to help provide for their community and will need to tithe (Zakat) to a local Lawful organization 20 percent of the money they acquire.
Though they are seen as a holy figure, people are often unnerved by the presence of an Al’Numur. The predator nature of the warriors can scare the average man, and they often lead very lonely existences. People who see them in battle are often frightened to the point of fleeing, even if they are being protected. The sight of The Shape can only be tolerated by the stoutest of hearts, or the loyalist of friends.
In order to receive a 5% experience bonus either the character's DEX or WIS must be above 13. If both of these are above 13, the the bonus is 10% 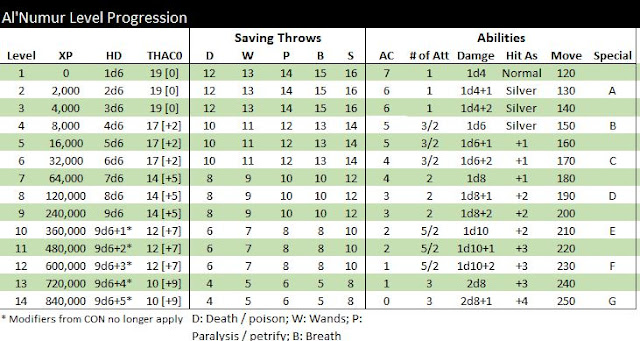