Over the Edge 3rd Edition

I recently received Over the Edge 3rd edition and it is an extremely beautiful product. The 3rd edition is more of a re-imagining of Over the Edge, than a sequel to the two previous editions. For those that played the previous editions, the feel of the game will be the same, but the mechanics and the setting have changed. I actually found this product because I was rereading my copy of 2nd edition, and said, “I wonder what Al Amarja would be like now?” The original is amazing, but steeped in the 90s culture that produced it. In a post-9/11 world, what would the island where “all conspiracies true” look like? I honestly had not kept up with Atlas Games and I went online to see if someone had written about it, and low and behold, Atlas had just completed a Kickstarter to fund the new edition that had updated the setting to a more modern feel.

For those who do not know what Over the Edge is, the game is rules light about an island where anything can happen literally. The island for a GM is a playground with anything available to be done. Do you want to play an international movie star and secret agent? Not a problem. Want to play a psychic priest who worships the machine god from the future? Why not? Want to play a lizardman rock star with an addiction to a drug that only exists on the 5th dimension? Sure. I remember back in the day people recommended to get plot idea for Over the Edge from super market tabloids, because they fit. Everything takes place on the island nation of Al Amarja that is unique in that it has a whole host of weirdness going on 24 hours a day. I am not trying to be vague with my description, it is really something you have to read to understand. I think the best feel for the game is equal parts David Lynch, X-Files, and 1984.


For those of you that have played the previous edition, what is different? Um…Everything and nothing all at the same time. The mechanics for the game are even lighter than the previous editions, and that is saying something. The setting is, as mentioned earlier, a re-imagining. No longer is Al Amarja in the Mediterranean, but has been moved to the Atlantic Ocean. This does not have a plot reason, it is just always been this way. Many of the districts, landmarks, and people have the same names, but they are not the same in function or weirdness. That is how it is different. How is it the same? The feel of the game is the same and the fiction you can create with the game is the same. The same tone of Lynch, X-Files, and 1984 combined with the advancements of the past 25 years. Al Amarja now has a vast amount of technology, including a very strange internet connection. It has a police state feel, that is a little darker and more oppressive than before. It also has some of the most evocative art I have seen in an RPG in a long time.
This is a great RPG product, and is just a fun read in general. If you are interested in a game that exudes weirdness in the best possible way. You really have to stretch your GM muscles, and player muscles to some extent, because the paradox of choice is in full effect. You have so many options that picking what to do can actually be difficult. I encourage people to stay with it, because it can be quite rewarding. I’ve been with this game quite some time, including the card game, and this feels like a fresh coat of paint on a classic car…or maybe a miniature.

Below is a collection of art from the new edition. 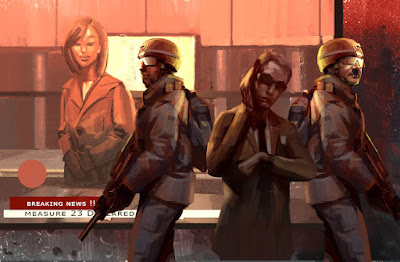 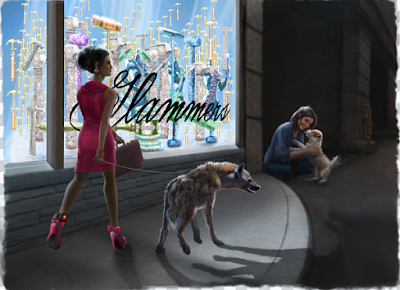 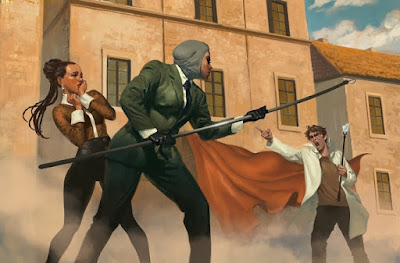 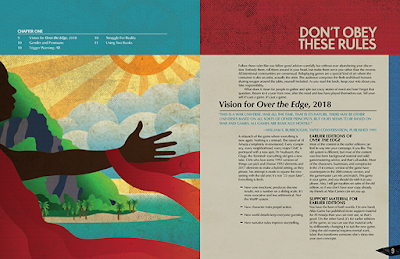