King Suleiman decreed that man and Genie must live apart, and any time they crossed paths only disaster could follow. It became a known in both the Human-world and the Genie-world that avoidance was the best policy, and then became the law. Laws exist only to be broken, and human-genie “dalliances” have come to pass. In the case of the pure elemental Genies, these children are taken back into the Elemental Planes, because their appearance is too foreign to blend into the Human-world. In the case of the Jann, they have no plane to retreat back, and must stay on the Prime Material Plane. When the union of a human and a Jann happens, the offspring is a Hajanni. Their very existence is considered a crime in the civilized worlds. Fortunately, Hajanni can often blend in and pass for human. 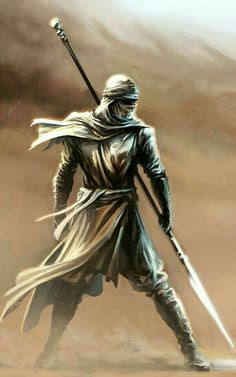 A lonely life in the desert.

Hajanni appear as physically fit, almost too perfect specimens of humanity. They are often taller that the average human, and tend to be brawny. There is usually one feature about the Hajanni that can reveal their true nature. Their eyes might be an unnatural color, perhaps as dark as coal. A Hajanni’s hair might appear perfectly normal, but when touched it is like trying to grasp the wind. One’s skin might be extremely warm, almost burning to the touch. Some have fine features, but when their skin is touched it ripples like water. Once these signs are discovered, the Hajanni is often not welcome in polite society. In the worst cases, for the violations of Suleiman’s laws, they are executed. Their talents, and nomadic natures often make them good adventurers. The types who run in adventuring circles are not often concerned with one’s breeding. 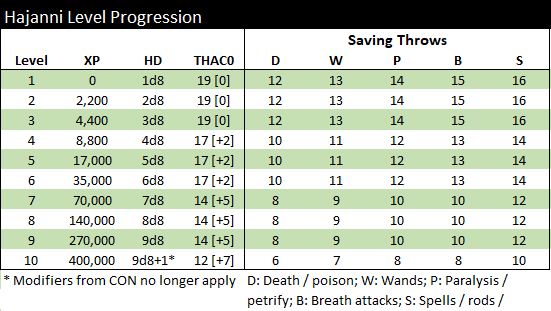 Detect Genies
The Hajanni has a 2 in 6 chance to discover hidden Genies in the area, recognize their actions/work, and know their magical effects. The will automatically identify items related to Genies, like a Ring of the Djinn.

Listening at Doors
Hajanni have a 2-in-6 chance of hearing noises.

Growth
Once per day, for a number of round equal to the Hajanni’s level they can grow to double their size. This will double the damage they inflict. If the Hajanni cannot grow to the full size, the power will not work, and is wasted.

Shrink
Once per day, for a number of turns equal to the Hajanni’s level they can shrink to 6’’ high. While this size they cannot hurt any creature larger than 1’ tall, even then the damage is halved. The character has a 9 in 10 chance to not be spotted if they remain completely still.

Speak with Animals
Hajanni can speak with any natural animal.

Genie-Kind
Effects that detect, bind, or harm Genies will work on a Hajanni.

Scorn
People who know the nature of the Hajanni’s birth are often repulsed by their existence. If known, the Hajanni will suffer a -1 penalty on Reaction Rolls with the target.

A Hajanni has the option of creating a tribe that will attract outsiders with no other place to go. The tribe will not stay in the same place, but can be called upon to aid the Hajanni when needed. The tribe will consist tribesmen warriors numbering 250 per level above 8th. The warriors are 1st level with 1/5th being cavalry, all having basic combat gear for their respective duty. The tribe can be mustered for a specific short term purpose, after that they will continue to wander. Forming the tribe for such an event will take 1 week, and the tribe will continue the respective purpose for a number of weeks equal to the Hajanni’s level.

If you are unfamiliar with Jann, please see my previous article on Genies here.