I was discussing online wizards again with people and the discussion of optional spellcasting rules came up, specifically spell points. I thought I might give a spell point system a crack for B/X or OSE. It has been a little bit of time since I published an OSE article, I have been massively busy in life and especially at work.
Spell points are designed to make wizards a tad more flexible, and in that flexibility comes a bit more power. The flexibility should come at a cost though, and hopefully balance out with the rest of the game well. This is a continuation of my original Make Wizards Great Again article.


Wizards gain a number of spell points per level that allows them to cast spells. A wizard with a high INT will get bonus spell points based on the chart below. As the wizard increases in power they will gain access to higher level spells, more spells they can memorize, and more spell points. A wizard still follows the standard array for spell level access, just because a wizard has enough spell points to cast a spell, does not mean they have access to that level. Wizards still maintain a spellbook, and the resources inside still dictate what spells they have access to as a caster.
Wizards also still memorize the same number of spells per day. These spells are the ones in the forefront of their mind, and easily accessible. A wizard can cast a spell that was not memorized for the day, but at a great cost to their power for that day, and the wizard will pay the Non-Memorized spell cost. Each time the wizard casts a Non-Memorized spell in a day, it cause serious fatigue. Each casting of a Non-Memorized spell, after the first, will cause a wizard to lose access to their highest level of spells for that day. If they continue, they will lose access to an additional level, and so on. 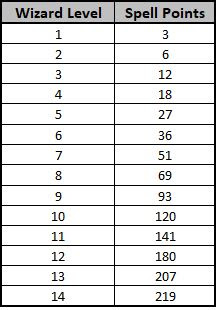 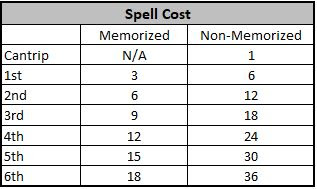 Wizards also have the ability to reduce the cost of a spells through various means. Ways in which a wizard can reduce spell point cost are:

If you are looking for some good B/X cantrip rules, please check out B/X Blackrazor’s article Magical Skills (Cantrips). It handles cantrips in a fun and useful way. Blackrazor has an idea, that I support, that cantrips should be useful, but not offensive or defensive. I was going to write my own cantrip rules, but why write something that was already done well?
What do you think? Will these work? I am looking for any constructive feedback, from people that read the entire article. Thank you for reading and look for another post soon.