The Order of the Dervishes dedicate themselves to a life of prowess, focus, and faith. At a young age children are taken to local masjid where they are trained in both the ways of the Holy Word, and the sacred combat arts. They are tasked to go into the world and defend the faithful from the evils in the world. Specific to that mission is the destruction of Ghuls, undead, and those that would create them. They have come into great renowned for their ability to wield mystical abilities that come straight from their faith in the Prophet’s message.
The primary weapon of the Dervish is the Zulfiqar. This curved sword with a split end is respected as the weapon of the Dervish Order. These blades are only forged in holy sites and the process takes years. Each Zulfiqar has scripture written over the blade, and based on the passage that is on the blade, the blade gets name. This makes each Zulfiqar unique. These blades are said to be so sharp that it can cleave the pure evil from corpse-like bodies of the Ghuls and the undead. There are stories of the Dervish’s Zulfiqars lighting with a holy fire and driving foul creatures to the depths which they came. Only servants of the Fallen Angel would use the weapon without being a part of the Order. It is accepted that if one of the People of the Faith comes across one of these blades in the wild, they will return it to the Order as soon as ability allows. These Zulfiqars over time gain mystical properties and are passed down from generation to generation.

Alignment: A Dervish must be lawful. If the character’s alignment ever changes, they lose their class abilities and become a fighter of equal level. Seeking out an Imam for the chance a penance, which usually comes in the form of a quest, can restore their abilities.

Combat
Dervishes can use any bladed weapons and may wear any armor. 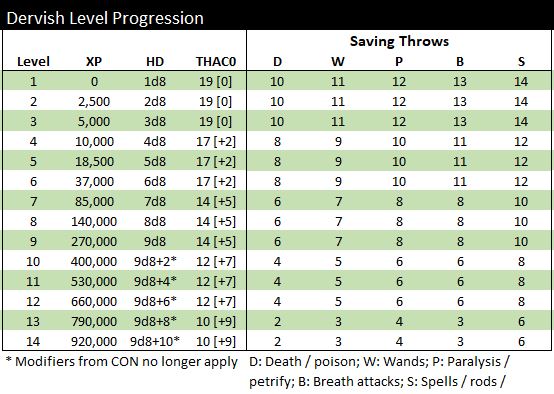 Holy Endurance
Dervishes are immune to all disease.

Detect Evil
Dervishes can Detect Evil as per the spell, at will. Casting the spell takes an entire Turn of concentration.

Cleaving the Undead
Dervishes starting at 1st level can invoke the power of their deity to attempt to sever the connection of undead to the world. To sever undead, the Dervish must attack an undead with their Zulfiqar and hit the target. The player rolls 2d6 and consults the Cleric’s Turn Undead chart, all results are only applied the target of the attack. This may be done as many times a day as the Dervish wants on different targets, but never more than once on the same target per day.

Zakat
The Dervishes is expected to help provide for their community and will need to tithe (Zakat) to a local Lawful organization 20 percent of the money they acquire.

Respected
People of the Faith that know the character is a Dervish often feel blessed by their presence. If known, the Dervish will gain a +1 bonus on Reaction Rolls with the target.

Holy Beings
Ghuls and all Genies are bound by a mystical oath and cannot directly lie to a Dervish.

After Reaching 9th Level
With the permission of the Holy Order, the Dervish can build a fortification and control the surrounding lands. The Dervish may be granted a title such as Sahib or Sahiba.

There we have it! I am wondering how this looks? I might have trimmed too much, I am not sure?