In the great cities throughout the Great Empire the preservation of knowledge has always been a societal priority. Madrasa throughout the lands are dedicated to the pursuit of knowledge and studying the great works of the masters. Many societies have existed before the coming of the Prophet and the taming on the Great Empire, and their knowledge was at risk of being lost forever. The Caliph of Caliphs ordered that text and manuals from any kingdom would be purchased at the expense of the Great Empire. This created vast libraries of information and copies of these great tomes were distributed to the schools all over the Empire.
One of these foreign arts was the lessons in Sacred Geometry and Numerology. It was improved upon by the scholars of the Empire and soon that practice was well respected all across the land. Many a court vizier was taught in the Geometric Arts. Many a nobles 3rd sons (three is a powerful number) are sent at a young age to begin the process of learning the Algebraic Theories. Their lessons and ceremony are shrouded in mystery, some claim the Geometricians have an alternative view or altogether new faith, then that does not match the principles of the Prophet and her sacred texts.
Many Geometricians are quite wealthy as they grow in power, their services are always in demand and demand top pay. Beyond that they make excellent accountants, bankers, warehouse managers, as well as court officials. 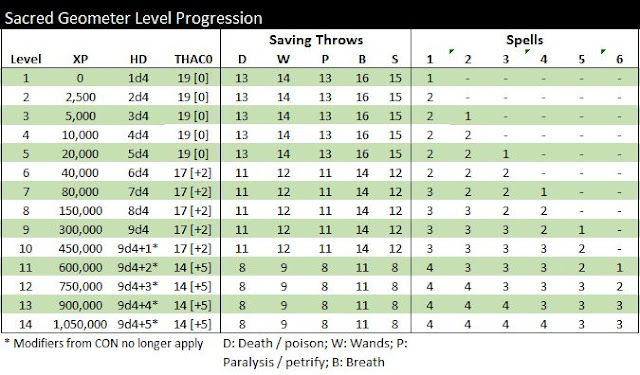 Combat
Sacred Geometer cannot wear armor and may only use daggers.

Oath of the Omnipresent Circle

Geometricians are never allowed to harm one another, physically, psychologically, spiritually, or especially financially. If a dispute happens, a higher level Geometer must mediate the circumstance and mutually resolve the situation. If a Geometer is found to have harmed another in the Order of Sacred Geometricians, they will be physically branded and cast from the order.

Geometricians are arcane casters, like Magic-Users, but they accomplish the magic in a different way. Through complex calculations, somatic gestures that form sacred patterns, and rote memory they can cast the spells available to Magic-Users. This process is much more deliberate and exacting, thus when casting they go last in the round, akin to two-handed weapons.

Studying becomes an obsession with Geometricians and they must ensure that every mystical form is perfect for their magic to work. Geometricians take more time to rest and study spells. Instead of 8 hours they require 10 hours to rest and memorize spells.

Geometricians have their own style of creating scrolls and cannot stand the “sloppy” work often done by other arcane casters. Geometricians cannot use a found scroll, but can copy the scroll in their own style. This is easy work for the Geometer, but does take time. The Geometer can accomplish this in 1 hour per level of the spell(s) and renders the original useless.

Geometricians find the art of potion making confusing for their ordered mind and leave that sort of thing to the Alchemist, thus Geometricians cannot create potions.

Given time the Geometer can work out his formula ahead of time by writing out the equation. It must be a spell that they have already memorized for the day. This process is usually done on paper, but other surfaces can suffice. This process takes a full turn to write out the long-form of the spell. When the Geometer goes to cast the spell off the written record they will automatically go first in the round, as if they surprised the enemy. The Geometer can only have one of these text at a time, and must be used within 1 hour of completion.
The Geometer must have something to write with in order to use this ability, whether it is a pen, stick in the mud, or even a chisel and stone. When the spell is cast, the surface that was written on is ruined for future castings.


Geometricians are experts in writing out sacred formulae and can begin producing scrolls at 5th level at half the normal time needed, and for half the cost.

Sacred Geometricians specialize in the creation of Glyphs and Wards to serve as protection for an area or an object. The Geometer inscribes a Glyph with another spell, that they already have memorized, set to trigger under a given circumstance. Starting at 7th level the Geometer can inscribe a Glyph onto an area or object that is no bigger than 10’ X 10’. This process takes special supplies in the form of incense and oils (100 GP per level of spell being inscribed). The Glyph uses up one of the Geometer’s 4th level spells, and uses the spell they are writing into the Glyph. They can create a trigger for the Glyph to cast the spell this could be; when someone comes within 10’ of the Glyph, someone steps on the Glyph, someone uncovers the Glyph. These cannot target a specific person like, when Hakim enters the room or even when a wizard enters the room.

Heavily inspired by the AD&D Geometer (from Spells & Magic), but with some personal changes and making it more fitting with BX/OSE.