New Race as Class for BX and OSE - Qa'rim

Some people, often the famous, talented, prosperous, or devout, have a genie-double. These doubles come into the world at the same time as the originals, but lead completely separate lives. The doubles will grow, age, have lives and careers, and pass away in roughly the same number of years as the original. Qa’rim are often assumed to be the wicked reflections of the original, but this not always true. Qa’rim do share the chaotic nature that is present in all genies, but they still make their own choices in their lives. Qa’rim are tricksters by nature, and they specialize in magic that reflects this nature. Many times qa’rim can become jealous of the lives of their great and successful doppelganger, this has led to more than one trying to make a switch in lives.
There is no inherent connection between the genie and the original, there are no mystical bonds or shared souls, and they only share an appearance. If one dies, the other is unaware and unaffected and will continue on with their lives until its natural end. Even the Prophet had a qa’rim, though she was famously able to convince the genie-double to turn from wickedness and their chaotic nature, and become one of her followers.
Qa’rims are not liked among genie-kind, and being ignored by the genies is often the best case scenario. Often qa’rim will be hunted to down if discovered by any of the genie-kind. Humans are not much better when it comes to the qa’rim. This leads most qa’rim to live in the margins of society, which leads to more resentment towards the world at large.

Magical research: A qa’rim of any level may spend time and money on magical research. This allows them to add new spells to their spell book and to research other magical effects. When a qa’rim reaches 9th level, they are also able to create magic items.

Spell casting: Qa’rims carry spell books containing the formulae for arcane spells. The spell casting chart shows both the number of spells in the qa’rim’s spell book and the number they may memorize, determined by the character’s experience level. Thus, a 1st level qa’rim has one spell in their spell book, selected by the referee (who may allow the player to choose). The list of spells available to qa’rims is provided in Druid and Illusionist Spells (qa’rims have the same spell selection as illusionists).

Using magic items: As spell casters, qa’rims are able to use magic scrolls of spells on their spell list. They can also use items that may only be used by arcane spell casters (e.g. magic wands). 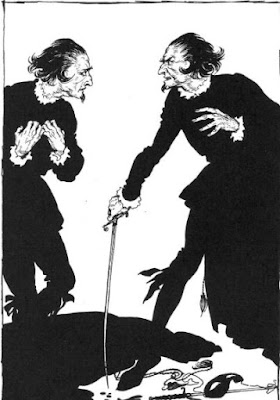 Combat
Qa’rims can use all types of weapons and armor.

Infravision
Qa’rims have infravision to 60’.

Listening at Doors
Qa’rims have a 2-in-6 chance of hearing noises.

Detect Secret Doors
Qa’rims have keen eyes that allow them, when actively searching, to detect hidden and secret doors with a 2-in-6 chance


Limited Flight
Qa’rims can cast the Levitate spell once per day.


Qa’rims, though genie, are immune to being bound to servitude by Sahira magic.