New Class for BX and OSE - Devotee of the Prophet

Devotee of the Prophet

The faith of the Prophet is ubiquitous throughout the Great Empire, and while it is universally known, tenets of the faith do not always seem to exist harmoniously. The Prophet did not solely contain herself to religious matters, she was a leader of civic government, a leader of armies, and also a leader in the faith. In trying to follow the examples laid out by the Sacred Texts, many of the devout followers pick an aspect of the faith to focus their study. The Mulldi spend years in the finest schools learning about the faith, but also learning heavily in the matters of state and governance. The Surshid are spiritual leaders whose main focus is interpretation of the Sacred Text, and how one can have a closer relationship with the Lord. Esmam are the defenders of the faith that are often found in streets or in the wilds, their true focus is letting none harm the faithful and especially the faith itself.


Devotees can use all types of armor. Strict holy doctrine prevents devotees’ use of weapons that have a sharp, cutting edge or stabbing point. Weapons usable by devotees are noted in the equipment list. 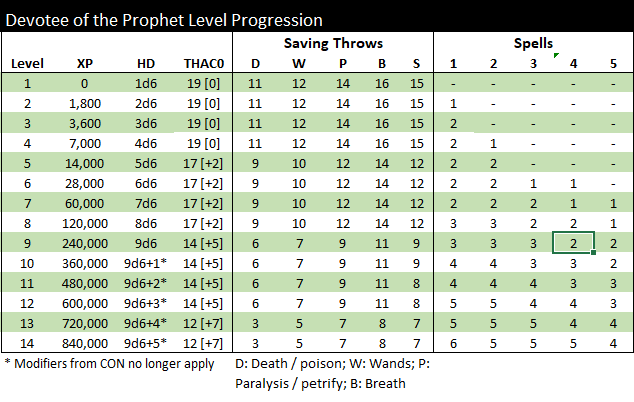 Holy symbol: A devotee must carry a holy symbol.

Deity disfavor: Devotees must be faithful to the tenets of their alignment, clergy, and religion. Devotees who fall from favor with their deity may incur penalties.

Magical research: A devotee of any level may spend time and money on magical research. This allows them to create new spells or other magical effects associated with their deity. When a devotee reaches 9th level, they are also able to create magic items.
Spell casting: Once a devotee has proven their faith (from 2nd level), the character may pray to receive spells. The power and number of spells available to a devotee are determined by the character’s experience level.

Using magic items: As spell casters, devotees can use magic scrolls of spells on their spell list. They can also use items that may only be used by divine spell casters (e.g. some staves).

Turn the Undead
Devotees can invoke the power of their deity to repel undead monsters encountered. To turn the undead, the player rolls 2d6. The referee then consults the table opposite, comparing the roll against the Hit Dice of the undead monsters targeted.

Successful Turning
If the turning attempt succeeds, the player must roll 2d6 to determine the number of HD affected (turned or destroyed).Turned undead: Will leave the area, if possible, and will not harm or make con-tact with the devotee.

Destroyed undead (result of D): Are instantly and permanently annihilated.

Excess: Rolled Hit Dice that are not sufficient to affect a creature are wasted. However, at least one undead creature will always be affected on a successful turning.

Mixed groups: If turn undead is used against a mixed group of undead monsters of different types, those with the lowest HD are affected first.

Number: If the 2d6 turning roll is higher or equal, the turning attempt succeeds.

D: The turning succeeds; the monsters are destroyed, not simply caused to flee.

Devotee Abilities
Each of these sects has different tenets which change the class slightly.

Respect
The Mulldi has 1 additional Station at the start of the game. This point cannot be lost, unless convicted of a crime.

Enlightened
The Surshid are closer spiritually then most in the world and as such have great power. The Surshid is gains 1 additional 1st level spell at first level.

Faithful
The power of God flows through the Surshid and banishes the wicked from the earth. The Surshid Turn Undead as if they were 1 level higher, and can use Turn Undead on the creatures of Shaitan.

Weapons of Faith
The Esmam defend the faith, sometimes quite literally. The Esmam are able to use all weapons, not just blunt.

Tip of the Tongue
Certain spells come like second nature to the Esmam due to their training and mantras. The Esmam can exchange an unused spell to cast and equivalent level spell from the list below. This means that the Esmam could have Cure Light Wounds memorized, and instantly change it to Protection from Evil.