In generations past, many foreign slaves were brought into the Great Empire for use as soldiers and guards. They were bought as youths and sold to the elite of the lands, brought up in training houses with methods that would be deemed unthinkable today. As time passed, they grew to have a fearsome reputation and claimed respect one honorable deed at a time. The Mamluk were able to keep their culture and many of their ways intact over the years. Since that time, the Mamluk and all slaves in the Great Empire, were freed and made citizens by the Caliph Yazid ibn ‘Abd Al-Malik IV the Blessed Liberator of Souls, Enlighten Caliph of the Stars, Protector of the Empire, Keeper of the Ways of the Prophet and her Mercies, May the Lord Bless and Keep Him in his Eternal Slumber.
Some of the Mamluk, after being freed, went back to the Steppes which they came from, but many had roots in The Empire, and made the decision to stay. Often towns, cities, and settlements have sections for Mamluks, “Mamluk-Town”, and while it is not required for Mamluks to live there they often feel comfortable with their own.
Today Mamluks hire themselves out as mercenaries and guards for those who can afford them. Often the Mamluk community will have a contract with the local government providing the community with supplies, and the Mamluks providing protection for the community. Mamluks have over time formed a binding set of rules and regulations that rule their actions, deeds, and thoughts. The “Kirik Zincir Kodu” or just the “Kudu”, helps to guide a Mamluk’s life and holds their actions to always be honorable, and obey the commands of those that hold their contracts. The only exceptions to this is they will not tolerate putting people into bondage, and actions should be to uplift the community, not destroy (this last one is always up for interpretation).

Mamluk Warrior Titles: At 1st and 2nd level the Mamluk is considered an “Initiate” or “Son/Daughter” and are not yet respected as true Mamluk Warriors. Upon reaching 3rd level the character goes through a Blood Ceremony, and is brought into the fold as a full “Brother/Sister” in the clan. Senior members of the clans (level 8 and above) are referred to as “Father/Mother” and those truly senior members (13th and above) are referred to as “Grandfather/Grandmother”.

Alignment: A Mamluk can be any alignment, as long as they follow the Code. 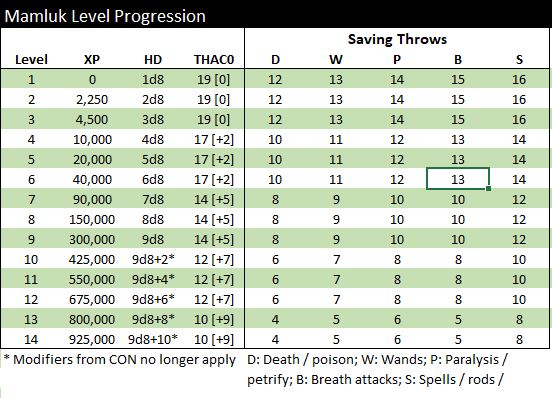 The Mamluk have a code of conduct (Kudu) that they are honor bound to uphold. Any action that violates the code will not earn the Mamluk any experience. The major tenets of the code include, honor is more valuable than life, a contract is honored until it is over, service to the community is the greatest honor, in combat the expectation is perfection, respect the clan’s elders, one’s equals, and one’s hired superior, despise the dishonorable.
These are the major tenets, the code also includes methods to conduct life like grooming, sanitation, and dress. It also includes proper methods of training, combat techniques, and how to conduct honorable warfare. It is a total guide for a viable life.

A Mamluk of 3rd level or higher can expect to be taken in by another community of Mamluks as a guest. The same is expected of the Mamluk in return for their fellow people.

The Hainler (Traitors) are Mamluks that have abandoned the Kudo and possibly become bandits and thugs. The Mamluk is shunned from the community, and has his levels converted into Fighter. (Hain is the singular form of Hainler)

Forged in the Fire

Many Mamluks have trained since birth for combat, specifically combat in extremely hot environments. Mamluks suffer no penalty for wearing chainmail and shields due to heat, and only suffer a -2 penalty to attack/checks for plate mail. When wearing metal armor in the heat for extended periods of time the Mamluk must consume twice the normal allotment of water per day. 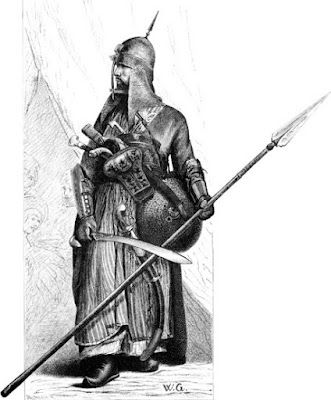