There has always been two peoples in The Great Empire, the people of the cities, Hadir, and the peoples of the desert, Badawi. The Badawi exist in tribal societies that live a nomadic lifestyle. Tribes generally consist of 10 – 15 families and often focus on herding and animal husbandry. Once every three years all the tribes of the lands gather a sacred oasis for a combination of festival, religious observance, and political discourse. Problems are hopefully solved, marriages arranged, and good exchanged.
The Badawi have very different traditions than the Hadir, also each individual tribe can have local customs. The religion of the Badawi is that of the Prophet, but many of the rituals and ceremonies from before the Prophet’s Revelation are still celebrated or incorporated into the faith. It is because of many of these difference that bad blood has stemmed between the Badawi and the Hadir. Both groups have grown up with warning against each other. Hadir warn their children that the Badawi are not civilized and only raid caravans, steal, and pillage. Badawi believe that all Hadir only care about money, live lazy lives, and lie with each breath.
Badawi are raiders, but they mostly raid other tribes and leave the Hadir alone. Raiding is custom in life, the skill is getting goods, without being noticed. These raids can lead to violence, only in extreme instances death. Badawi warriors guard the tribes goods, chase off the other raiders, and raid for more goods. This circular pattern that develops with goods and raids will never truly be understood by the people that live in the cities. 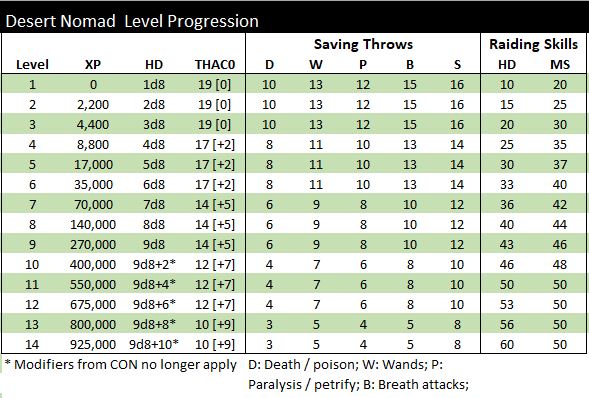 The desert nomad is not at home in the crowded streets of the cities and urban areas. While in these environments the nomad has a -2 penalty to attack rolls and ability checks. This does not affect travelling in dungeons or ruins, only urban area with many people.

A party with a desert nomad succeeds at foraging with a 2-in-6 chance and finds prey when hunting with a 5-in-6 chance. Also given proper clothing and gear the Badawi can stretch their water supply, and the water supply of their party. The Badawi and their party can go twice as long without suffering penalties for dehydration. When traveling through the desert the desert nomad’s chance of getting lost is 1-in-6 chance.

Desert nomads are expert riders, and can assess the worth of any horse or camel. At 5th level the nomad can urge their mount to great speed. This will increase the mounts speed 30’ (10’) for up to 1 hour, once per day.

I went ahead and created a Facebook group for the blog, if you are interested the link is here.
Posted by Ryan Marsh at Saturday, August 17, 2019