New Class for OSE and BX - Follower of the Primordial Cults

Follower of the Primordial Cults

The religion of the Primordials was the major religion of the lands before the coming of the Prophet and the revelation of the Creator. The Primordials worship one of the fundamental forces of the universe, Earth, Air, Fire, and Water. While in reality, the Lords of the Elements are not actual gods, they are extremely powerful entities that can bestow powers as if they were gods. They actually have little concern for the affairs of the mortal world, but the worship bay their followers nourishes them and gives them strength, thus they have vested interest in recognizing the pleas of their followers. The Lords of the Elements are Azarizad, Queen of Flames, Zam-Armatay, Mother of the Mountains, Apam Napat, Lord of the World Ocean, and Tishtrya, King of the Storms.
While technically not illegal, practice of these old ways is certainly frowned upon. Truth be told, many a devoted follower of the Prophet still has a small token alter to one on the Primordials in their home as “decoration”. Before making a long sea journey a person might still seek out a follower of Apam Napat and offer a small donation for a safe journey, but it is all superstition, or is it? 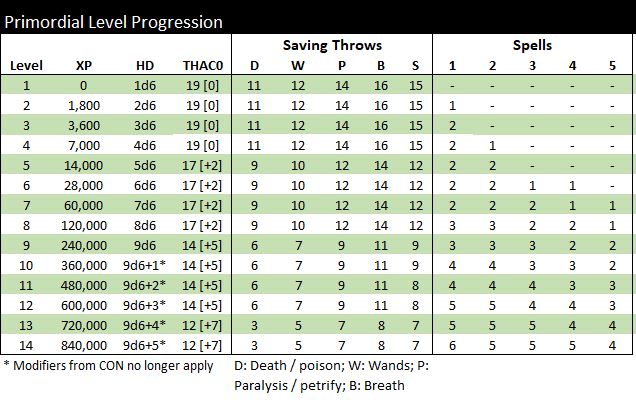 Devotion: At character creation, Primordial follows must pick one element to worship, and can cast spells from the appropriate list below.

Holy symbol: A primordial must carry a holy symbol.

Deity disfavor: Primordials must be faithful to the tenets of their alignment, clergy, and religion. Primordials who fall from favor with their deity may incur penalties.

Magical research: A primordial of any level may spend time and money on magical research. This allows them to create new spells or other magical effects associated with their deity. When a primordial reaches 9th level, they are also able to create magic items.

Spell casting: Once a primordial has proven their faith (from 2nd level), the character may pray to receive spells. The power and number of spells available to a primordial are determined by the character’s experience level.

Using magic items: As spell casters, primordials can use magic scrolls of spells on their spell list. They can also use items that may only be used by divine spell casters (e.g. some staves).


If the turning attempt succeeds, the player must roll 2d6 to determine the number of HD affected (turned or destroyed).

Turned Elemental Creature: Will leave the area, if possible, and will not harm or make con-tact with the devotee.

Excess: Rolled Hit Dice that are not sufficient to affect a creature are wasted. However, at least one undead creature will always be affected on a successful turning.

Mixed groups: If turn elemental creature is used against a mixed group of elemental monsters of different types, those with the lowest HD are affected first.

Number: If the 2d6 turning roll is higher or equal, the turning attempt succeeds.

D: The turning succeeds; the monsters are destroyed, not simply caused to flee. 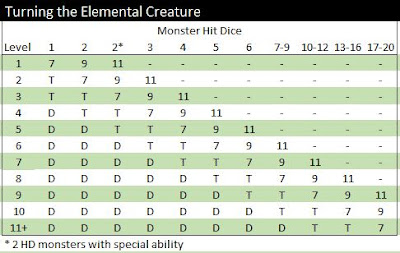 I went ahead and created a Facebook group for the blog, if you are interested the link is here.
Posted by Ryan Marsh at Sunday, September 01, 2019