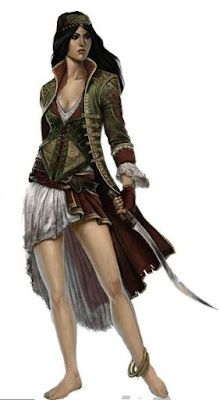 Trade has always been at the heart of the nation even in the days of the Prophet, and the kingdoms that came before her revelation. Long routes across the desert by camelback have been a tradition, but an equally great tradition is sea trade. The Great Empire has a love/hate relationship with Corsairs as a class of people. Many of the Empire’s greatest villains are these pirates that plunder the great seas. On the other side, many of the Empire’s noblest heroes also could be considered Corsairs under the employ of the Sultan. Many Corsairs actually function in the capacity of hunting other Corsairs that are plaguing the trade routes to other lands.
Many of the stories of the Empire has brash, young Corsairs as the main heroes swooping in under the noses of the elite and rescuing the princesses and showering jewels upon the masses. In general, these are just stories, but many a Corsair has romanticized their chosen career to gain an edge here and there. The truth is often more muddled with Corsairs helping as much as they hurt, for one day they are selling you cheap goods, the next they are stealing your cargo. 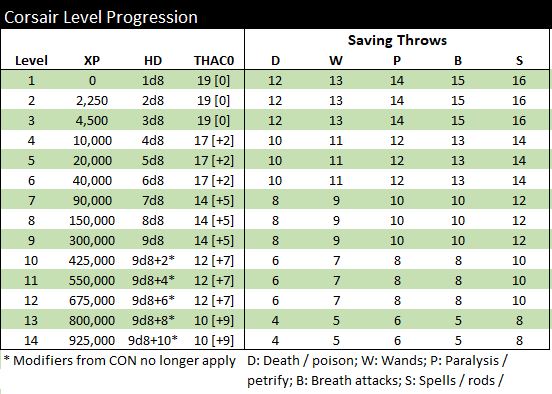 Seamanship
The Corsair is at home on the sea and on a ship. While on a ship, and wearing leather armor or less, the Corsair will never suffer penalties for rough water or the rocking of the boat. If a ship requires a captain to sail, the Corsair will qualify.

Nimble
Corsairs can Climb Shear Surfaces as a Street Rat of equal level while wearing leather armor or less.

Hunting and Fishing
A party with a Corsair succeeds at foraging with a 2-in-6 chance and finds prey when hunting with a 5-in-6 chance while on the water or near the coast.

I went ahead and created a Facebook group for the blog, if you are interested the link is here.
Posted by Ryan Marsh at Sunday, September 01, 2019